We specialize in heroin detox services.

Heroin is in a very addictive opioid category of drugs, meaning it does not occur organically in nature and is manmade. It is manufactured from morphine, which is derived from the opium poppy plant.

Heroin goes go by many different names on the streets, but comes in the form of either a white or brown powder, or as a sticky black substance. The drug can be snorted, smoked or injected directly into the bloodstream.

Whatever the delivery system, heroin quickly moves through the body and binds to a person’s opioid receptors located in the brain. Many of these receptors control the brain’s ability to distinguish pain and reward. This can create a false sense of well-being, and is the reason why heroin is so dangerously habit forming. More and more of the drug is needed over time to achieve the same euphoric effect.

It’s estimated that 23% of people who try heroin become dependent on it, and require specialized professional treatment for heroin addiction. Once addicted, users can experience a rapid need to increase their dosage. In some cases, heroin abusers use up to ten times their initial amount in as little as three to four months after their first encounter with the drug. 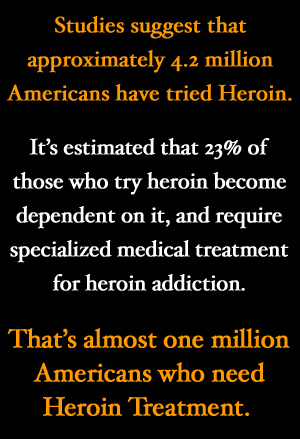 The most recent information on heroin use suggests that some 4.2 million Americans have tried this powerfully addictive drug. The addiction specialists at Trinity Behavioral Health recognize that, regardless of the statistics, every one of our patients in treatment for heroin addiction is unique and different.

Clients are monitored and treated during heroin detox in a safe and comfortable environment. They receive an individualized treatment program that caters not only to the physical addiction, but addresses the underlying personal reasons for heroin use. Trinity Behavioral Health helps patients overcome their heroin addiction and get their life back on track.

50% – 70% of intravenous heroin users have experienced non-fatal overdoses. Smoking and snorting the drug is just as risky when it comes to overdosing. No heroin use can be considered safe because the drug also affects opioid receptors located in the brain stem. This area of the brain runs processes vital to life, such as blood pressure and breathing, which is why respiratory failure is a common cause in countless fatal heroin overdoses.

Heroin Addiction and its Consequences

Long term use of heroin leads not just to serious health problems, but also creates numerous social problems like job loss, violence and crime. It also contributes to the spread of deadly infectious diseases such as HIV/AIDS and Hepatitis.

Heroin sold on the street often contains untold toxic additives that can cause additional and permanent injury to a user’s vital organs.

Continual heroin addiction and abuse can lead to:

Withdrawal from heroin is known to start in as little as 6 – 12 hours from a user’s last dose. A person in withdrawal from the opioid can experience body aches, cold sweats, a runny nose and severe mood changes like anxiety or depression.

Other symptoms can include:

If treated properly, heroin detox can be successfully completed in 5 – 7 days. However, some users can experience symptoms for weeks, or even months. This is known as Post Acute Withdrawal Syndrome (PAWS). It’s believed that this syndrome might be due to physiological changes in the central nervous system associated with continual abuse and should be monitored during heroin detoxification.

Our addiction specialists understand that the first step to recovery is proper treatment. Clients receive the utmost attention and care while detoxing in a therapeutic and secure environment.

Like many other chronic diseases, heroin addiction can be treated. The addiction specialists are leading this charge with cutting edge scientific treatments that combine behavioral therapies and non-12 step supportive services. Their incredibly effective approach has, time and time again, proven successful in ridding patients of their heroin addiction.