We specialize in opioid and opiate detox services at our facility.

Opioid abuse has become an absolute epidemic in the United States. The American Society of Addiction Medicine (ASAM) Opioid Addiction 2016 Facts & Figures report states that in 2012, over 250 million prescriptions were written for opioids in the US. That’s enough to give every adult in the country a bottle of painkillers.

Too often, opioid abuse leads to a lethal overdose. The Centers for Disease Control and Prevention reports that in 2013 alone over 16,000 Americans died of an overdose related to opioid painkillers.To put that figure into perspective, this translates to over 40 Americans dying from an opioid overdose every day. And this problem is far from isolated to the US – according to the World Health Organization, about 69,000 people die from prescription opioid overdose worldwide every year. 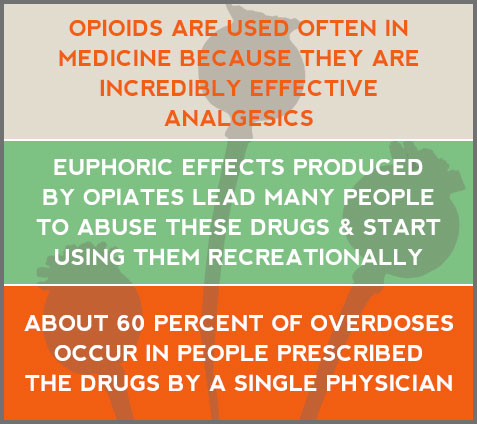 Opioids are drugs derived from compounds found in the opium poppy plant papaver somniferum. They are used often in medicine because they are incredibly effective analgesics. Opioids activate mu, delta, and kappa receptors, which are responsible for an opioid’s trademark pain relieving and euphoric effects.

Those euphoric effects produced by opiates lead many people who are prescribed painkillers for a legitimate medical reason to abuse these drugs and start using them recreationally.

Opioid abuse is more common than most people think. “One of the biggest misconceptions people have about opioids is that the risks apply to other people, not themselves,” writes Consumer Reports. “But the ‘typical’ victim of overdose might not be whom you think. About 60 percent of overdoses occur in people prescribed the drugs by a single physician, not in those who “doctor shopped” or got them on the black market. And a third of those were taking a low dose.”

Why Do So Many People Overdose on Opioids?

The most deadly side effect of opioids is respiratory depression, which means the lungs aren’t ventilating carbon dioxide out fast enough, resulting in elevated levels of carbon dioxide in the blood. This can lead to convulsions, unconsciousness, and death. When opioids are combined with alcohol and/or prescription antidepressants, respiratory depression is even more likely.

The stronger the dose, the more breathing is affected. Users build up a tolerance over time, so the dose they need to achieve what they consider an acceptable high increases over time. A large share of opioid overdoses can be attributed to addicts relapsing after rehab and immediately going back to their old desired dose, forgetting that they no longer have the tolerance they once had.

Here are some symptoms of an opioid overdose to look out for, in order of increasing severity:

Ideally, opioid addiction is treated before the addict has to deal with an overdose. Long-term opioid abuse does a lot of damage even without an overdose, as it affects sex and stress hormones and changes brain structure.

The first step of addiction treatment is detox. But once an opioid user has built up a tolerance, it is very difficult for them to stop using because of the fear of painful side effects due to withdrawal. The longer an addict uses opioids, the stronger their average dose becomes, and as the average dose that an addict takes day after day after day gets stronger, the potential withdrawal symptoms become more intense.

Indeed, opioid withdrawal can be extremely unpleasant. Withdrawal symptoms include: